Your world can turn upside down if the company you work for lays you off.

Securing other sources of income is a key component of taking back control.From an early age I had an interest in entrepreneurship and have persued many different activities over the years below is a summary.

You may also be interested in my pages on

Software targeting people installing software by Atlassian which allows for branding across all mobile devices.

This was a project I worked for about year. I was trying to change the way people conduct research on the internet by building a software plugin that could work with wordpress. The plugin was designed to add structure to research an promote group learning. Details around the concept can be found here. To assist with the development I founded a meet up where we met to get to the bottom of issues. After a year of trying to change the world I decided that I really needed to focus on changing my world a bit more with something a bit more pragmatic. I removed the custom software from the site and what remains is a disjointed record of the meetings and my software development journey. 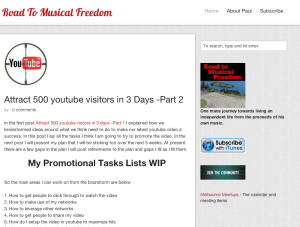 I had a moment of clarity a few months ago and it hit me that I had failed to promote my band successfully and I need to change my approach. The aim of this initiative is to create a local community that are all trying to promote their music. I hope that by creating this we will all benefit from new thinking and peer group competition.

Free events this week was at its core a simple ,easy way to find Free Events in your city. It was optimized for hand held devices.  It has been online since July 2011. The site was online for over a year and a half an in that time I developed content workflow that delivered 640 posts on the sight. At its height there were 40 posts, 1 podcasts and 1 youtube video a week. The main reason I killed it was due to the non evergreen nature of the content versus the work involved in generating that content.

This is where I am putting projects that I don’t have the energy or resources to develop further. A few months ago I made the decision that anything in this bucket should be published and given away to anyone who feels they can a make a go of my ideas. Please contact me if you would like more information

I set up this online niche store last year and since then it has not been given the attention it deserves due to other priorities in the business. It sold guitar picks in 25 or 50 packs aimed at the serious musician or rehearsal room. The concept is a good starter project as the stock is cheap and takes up minimal space. Profitability will follow once sales are up and prices can be negotiated. There were a number of strategies I had also planned to own the “guitar pick” thought leader space and promote the business.

I got this to a development stage before I decided to drop it due to other priorities.
The website is aiming to be the place in the world where the citizens of the country they represent can have there opinions heard. The website is called www.internetreferendum.org (I have the URL) and aims to be the place where referendums can be held online.

My career has spanned engineering, software sales, marketing and analytics during this time I have had many other entrepreneurial ventures. below are some highlights in reverse chronological order

Aires Software During the period of  2007-2009 I was collaborating with the owners and almost joined into a part ownership arrangement. I created the current website and also spent a few days cold calling and worked on sales and marketing strategy.

Detroit Underground 1998 I was working in software sales at this time and my work took me to live in Detroit for 6 months during which I developed a forum in ASP that was used for posting location and times of raves in Detroit. It had a life of its own and was quite impressive really.

BusNet In 1996 I developed a software application written in Visual Basic designed to teach the profit and loss account and balance sheet to students in the form of a game. This was my first software application I had a student programmer work on this. This lost focus when I started my career as a software sales person.

Dreamy Girlfriend At the age of 19 I had an idea to market audio tapes to people using subliminal messages to direct their dreams into a desirable direction. This was this was achieved was through using an audio tape put on to auto reverse and run through the night that contained suggestive sounds and messages. The first tape was called “Dreamy Girlfriend” the second was called “Paradise Island”. I completed the artwork for both tapes and completed the audio for “Dreamy Girlfriend”. The audio was my first venture into recording music it also featured a student I hired (my first ever employee) for 30 pounds to say cheesy sentences that got overlay ed throughout the audio track. Unfortunately it never got finished as shortly after recording the track my PC crashed and I lost everything. My enthusiasm to complete the project wained when I started to realise that I was the target audience for my own sarcastic product and I moved on to my next project. Note “commercialization”

Selling drinks, chocolates & bubblegum in the playground when I was 12 years old. This was very successful after time I stopped selling cans as they were heavy in favour of nearly 100% bubble-gum. At its height I was buying bubble-gum in bulk from the corner shop who was buying boxes in specially for me. The huge success caused an outcry however due to the large amounts of bubblegum being found around school. A special assembly was called and it was banned with strict penalties of possession. I had a sports bag full of bubble-gum at the time (contraband) . This meant I had to wind this up. Later a tuck shop was opened up which was the final nail for in the coffin for this venture.

For more details about my career go to