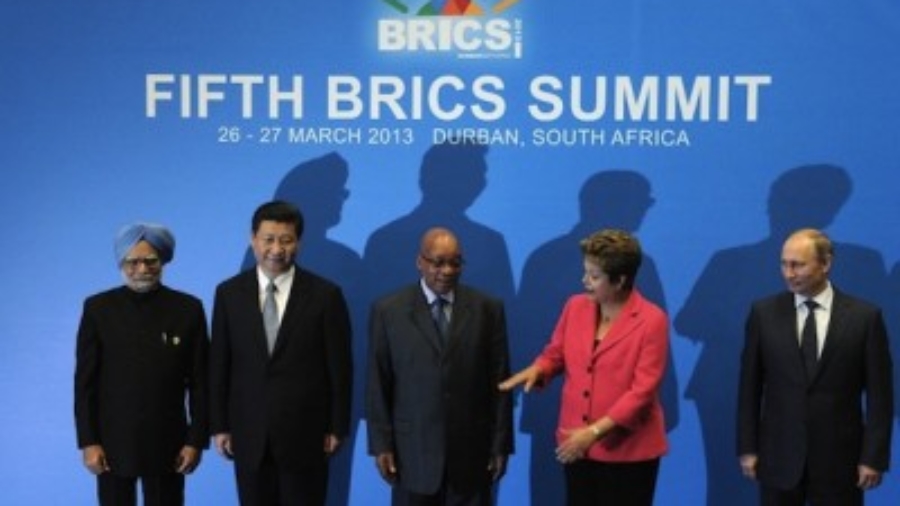 The world is changing, we are currently witnessing a shift in power which will have a huge impact on people that don’t see it coming. Brazil, Russia, India, China and South Africa and now Australia by making the decision to trade directly with china are moving off the US dollar as reserve currency it marks a move in world power away from US and European dominance.

Ultimately the western currencies will devalue and economic power and output will move to the places where they are protected from the financial meltdown. The countries in the BRICS alliance are well placed to be the beneficiaries of the shift. Coorporations and transnational companies and individuals may well benefit from all the mess but most of the non-informed propagandised public will be hurt significantly in the panic and by the lower standard of living that will accompany the shift.

In this post I will describe what being a reserve currency means and my view on the possible sequence of events and impacts of the coming economic shift.

What is a Reserve Currency?

Currently if a person from France wants to trade with a person from Russia the person has to exchange euros to dollars to rubels this means that US dollars are required for any international transaction. BRICS members have recently agreed to trade directly without relying on US dollars to assist the conversion. This is explained in more detail in the video

Below is a list of key events that I put together to show the likely sequence. 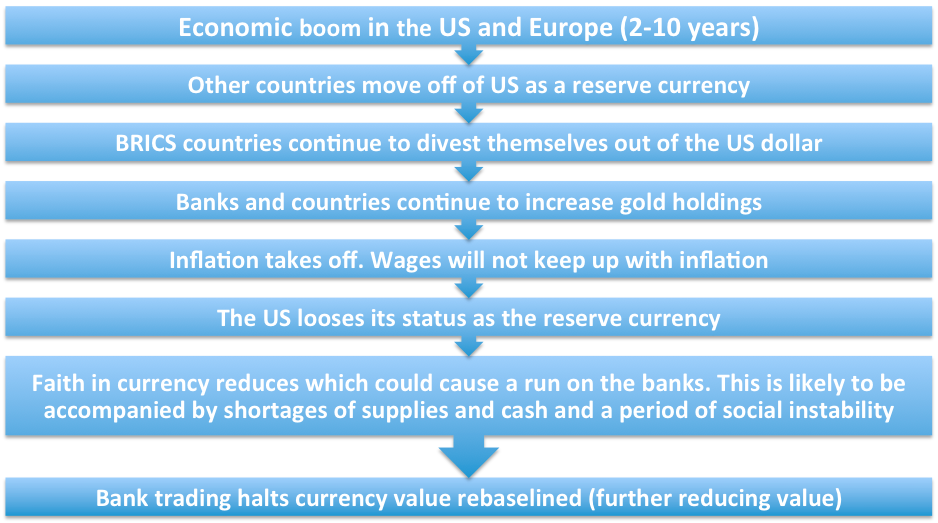 The Impact of the coming economic shift

High inflation will occur it is the only way governments can pay off large debts. The inflation could be a sudden activity (say 80% over one year) or it could be 20% year on year for 10 years.

Official inflation rates are not to be trusted. For instance the current official US inflation rate now excludes food and energy prices from its calculation.For more details about this see shadowstats

How much inflation is needed to allow the paying down of the debt?

They would need alot of inflation. According to the US debt clock US debt is currently at $16 trillion which is 6 times the 2012 US tax revenue which was 2.5 Trillion dollars.

US unfunded liabilities is the value of all the debts currently owed in the future by the government and covers items such as pensions, this is currently at 87 trillion dollars. 87 trillion dollars is more than economic output of the world (The current world GDP is estimated at around 70 trillion dollars) . If these numbers boggle your mind the video below might help you put them into perspective.

How far can our incomes fall?

Household income in the US, UK or Australia is 100 times more than that in India or China. Are we 10 times better? China and India both have good education systems. If Europe and the US loose control of the economic system (as is happening) I think we will see a huge change in incomes and the gaps will narrow.

In addition our view of poverty is very different to what real poverty is. Below you can see the huge difference on what is termed as the poverty line from country to country. A person below the poverty line in the US has 66 times more income than an person from India who is under the Indian poverty line. 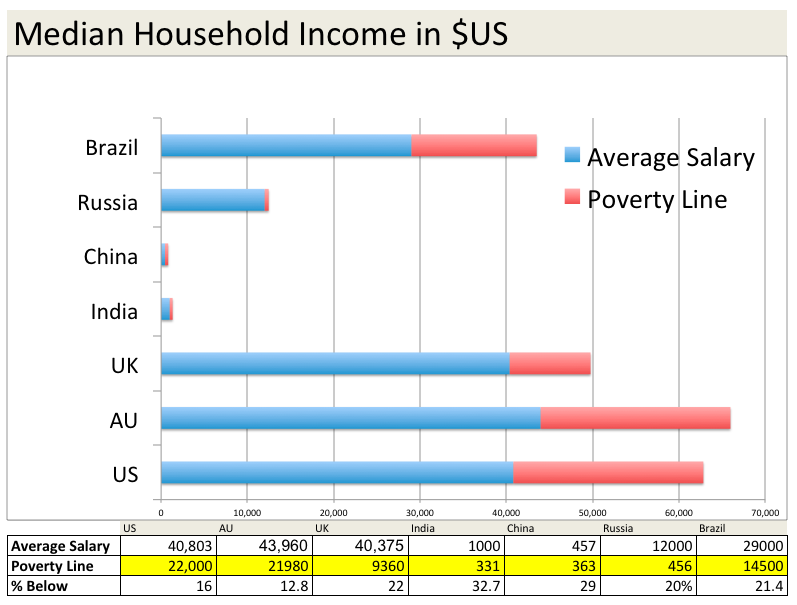 So what can you do about this?

I do not believe that there anything that can be done to prevent the up and coming economic shift. I have never heard any description of how this problem will get fixed. The focus should be on what you can do to mitigate its effect on you and people you care about.

The silver lining in this economic cloud is that I believe we have time to prepare. Financially you can take steps to protect your assets against inflation and personally you can take steps to make your lifestyle more robust to better weather the coming storm. I have written about this topic some time ago in an article which contains links to other resources including one of my favourite podcasts the survival podcast .

In this environment I believe that the correct investments strategy for most people should be focused around asset protection NOT wealth generation. Hedging against inflation can be achieved by moving investments out of currency into physical assets. Presently I am quite bullish about investing in silver and land in Australia and wrote a detailed article about investing in silver here. That said with any investment the devil is in the details and although I am keen on agricultural land I am extremely nervous about investing in urban property in Melbourne and I wrote an in depth article about that which can be found in my posts called “Is now a good time to buy a house”.